Mr. Thai Thanh Liem, CEO of Topebox, said that overseas Vietnamese game studios should return to Vietnam, because tax policies are no longer difficult, besides they will be protected, especially on issues. license.

With 80 self-produced games and being published by partners globally, Topebox is one of the rare game studios with corporate headquarters located in Vietnam.

Mr. Thai Thanh Liem, CEO of Topebox, said that one of the difficulties that made Vietnamese game studios previously located overseas is related to licensing and tax policies.

According to him, Vietnam is at the top in terms of production and distribution of Casual and Hyper Casual games globally, but if the company is located in the country, it will have to apply for a publishing license for these games. But the current policy of applying for permission is too cumbersome, when the procedure is complicated and the time to apply for permission is also long.

“With simple games of the Casual and Hyper Casual genres, the game life cycle is usually short, about 3 months, so when applying for a license, the license has not been issued, sometimes the game has already closed. This is a difficult problem that studios face today, causing them to choose the option of going abroad and setting up a global publishing company,” said Liem.

As for the tax issue, Mr. Liem said, this is not as complicated as before. As long as the business is guided and understood about the policy, it is possible to solve the problem. Typically Topebox is headquartered in Vietnam, so far, tax issues have been very easy to handle.

“The tax obligation studios should perform to show social responsibility, at Topebox employees are always communicated by the company about this, so that they try and contribute to the country. Studios should not be afraid of this problem when headquartered in the country, Topebox has been operating normally for many years without any problems, “said Mr. Liem.

Many opinions also believe that setting up studios in foreign countries like Singapore is to facilitate the investment environment, but Mr. Liem said that this is completely incorrect, because the investment environment in Vietnam is now very open. open and international investors have “lost money” a lot in the past time. Even now, people prefer to invest in Vietnam than in Singapore.

In addition, according to CEO of Topebox, placing a game studio in the country also helps companies to be better protected, especially copyright issues and legal issues. Because in the world, there will be many different and very complicated laws that businesses do not fully understand, it will be difficult when there are lawsuits or disputes. Particularly in Vietnam, everything is supported very quickly, especially on copyright issues, as long as businesses can prove that this is a product they own, they will be quickly resolved by the law.

According to Nguyen Tuan Huy, Director of Hiker Games, in order for Vietnamese game studios to return to their headquarters in the country, they need incentives to hope they change their perspective. 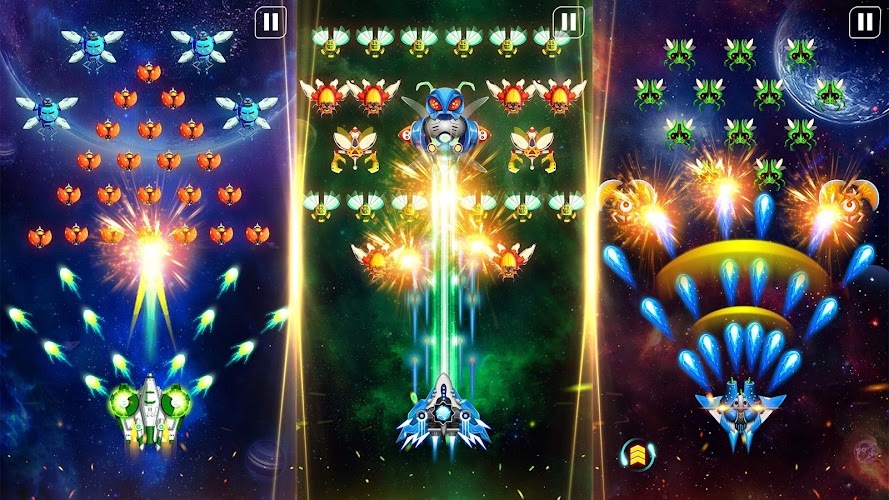 Galaxy Attack, one of Onesoft’s top-grossing and downloaded games in the world – Photo: Google Play

He said that licensing is still the biggest obstacle for businesses that are producing and publishing games in the country. Because it causes a lot of trouble in the procedure and the time to apply for a license, especially in the process of making a lot of documents.

Domestic tax is not a big problem, but there is one problem, tax collection due to revenue coming from abroad is the biggest obstacle for global game production and publishing businesses.

“With revenue coming from abroad, studios are now equated with revenue from Facebook and Google, which means an additional 5% value-added tax must be added, in addition, there will be an additional 5% contractor tax loss. So if based in Vietnam, studios lose up to 10% of tax but profit margin in the international market is usually not high, this is not reasonable. Because the game has been released globally to resonate and create a position for Vietnam, it should be encouraged, but this is taxed,” Huy shared.

Sharing the same view, Mr. Dao Quang Tuan, Director of Funtap’s business division, also said that the state should have reasonable preferential policies, such as tax and clear communication about policies, as well as priorities. treatment, then the current leading studios like Amanotes or Onesoft, the probability of them returning to the domestic market is quite possible.

Because of the fact that with preferential policies, these companies are easy to rise to billion-dollar startup is very high and they come to Vietnam to do long-term business will give birth to many new companies, such as today’s VNG, many People from this company have founded other companies, besides games, there is also technology and created a developed technology ecosystem in Vietnam.

According to Mr. Tuan, the return of major studios will also help Vietnam train high-quality human resources for the game industry. Besides, the problem of capital will also be solved, when the current investment environment in the country is attracting a lot of large investment funds both domestically and internationally.

For example, Funtap also has an investment fund, and from a mere game publisher the company is actively reducing imported games, investing in game production studios to survive. Because, it is not possible to completely depend on Chinese games, if they change their policies, domestic publishers will face difficulties. And if the state has reasonable policies, even other large enterprises will invest, not just Funtap.

After only a few days of launch, Stray, the game that helps players transform into cats, quickly reached the top of the most popular games on Steam.

The ‘chief architect’ behind Elon Musk’s takeover of Twitter

In the application submitted to the authorities a week before the transaction reached an agreement, the CEO of Tesla and SpaceX asked the “Blue Bird” to contact his family office contact to discuss issues. surrounding this acquisition. Portrait of the “butler” of the Musk family The family office, which manages the wealth of the richest […]

After the Covid-19 epidemic appeared, the demand for air purifiers in families increased sharply. In the segment of genuine air purifiers under VND 3 million, it is impossible not to mention the names below. Vsmart 30LA5300 air purifier only 1.99 million Vsmart is a brand that is no longer strange to Vietnamese consumers. No matter […]

Along with the urgent request to connect subscriber information (except for confidential information) with the national population database, Deputy Prime Minister Vu Duc Dam directed: The number of new subscribers has arisen since day 1. /8 must authenticate with this database. On June 15, the Government Office announced the conclusion of Deputy Prime Minister Vu […]

How is stress during pregnancy harmful?

Pregnant women with anxiety, stress put the fetus at risk of having the same problem; even affect brain development, according to experts. On August 15, Doctor Le Vo Minh Huong, Department of Social Work, Tu Du Hospital (HCMC), said that pregnant women are very vulnerable and sensitive due to birth changes. psychology, psychology. Some studies […]

Message to China! India made a bet by giving the Dornier Maritime Patrol Aircraft to the Sri Lankan Army

After the response on the ground, place to the political and financial response. While the return of the rain this weekend has allowed a lull on the fire front, particularly in Gironde, the executive is already announcing a series of tax aid to support the victims of this summer, through the creation of a “fire […]

Once again, American universities dominate the Shanghai ranking. Published on Monday, August 15, this benchmark ranking has been listing the best higher education institutions in the world since 2003. This year, for the twentieth consecutive year, it once again gives first place to Harvard. As in previous editions, only American and British universities occupy the […]

Two teenagers nearly died from drowning in a swimming pool

Ho Chi Minh CityTwo 13-year-old teenagers were submerged under water for about 5 minutes in the swimming pool, then were given first aid for heart compression, breathing, and then taken to the emergency room in a critical condition. On August 15, Doctor Vu Hiep Phat, Head of the Emergency Department, Children’s Hospital 2, said that […]

The European Space Agency (ESA) is in preliminary talks with billionaire Elon Musk’s SpaceX to temporarily use the company’s rocket system instead of the Russian-made Soyuz rocket. Besides SpaceX, ESA is also negotiating with partners from Japan and India because the European Ariane 6 rocket project is still delayed. In the context of the ongoing […]