With a new approach, the program “People ask – City answers” spread on social networks. Thanks to that, the Ho Chi Minh City government listens to people’s opinions to serve them better.

The Covid push changes the way it works

On the evening of August 27, Thach Khe Ma Ra (Binh Chanh) expressed his frustration when he did not receive the full amount of 1.5 million VND according to the support package of Ho Chi Minh City, saying that it was “blocked”, but did not know where to ask. Upon receiving the information, the representative of the government directly called, verified and resolved thoroughly, relieving the people’s frustrations in a difficult situation.

This is the first time that people’s concerns are received, answered and immediately resolved by the government thanks to the direct interaction in the program “People ask – The city answers”.

The program is organized by the Department of Information and Communications of Ho Chi Minh City in collaboration with the Department of Broadcasting and Electronic Information (Ministry of Information and Communications), livestreaming on social networks. Here, people’s questions about social security, health, education… are answered, opening a new channel for the government to interact with people and receive many positive feedbacks. .

According to Mr. Le Quang Tu Do, Deputy Director of the Department of Radio, Television and Electronic Information, the program has received the attention of many people. After 6 broadcasts, it has attracted 1.6 million views; 70,000 comments; the number of simultaneous views reached more than 20,000 at one time.

“People asked – The city answered” was done in a timely manner and had great meaning to the people of Ho Chi Minh City when the Covid-19 epidemic returned. According to experts, in the context of a stressful epidemic, some information on epidemic prevention and control is chaotic and contradictory. Therefore, direct dialogue channels will help people relieve information disturbance, especially in the context that interactive communication is the trend.

Talking to ICTnews, Mr. Le Quoc Vinh, Chairman of the Board of Directors and General Director of Le Media Group, assessed: “Dialogue channels like these allow people to ask questions and have the opportunity to get answers, to get relief. for questions. This is important. We see a large number of viewers, which shows that people’s interest is very large and people are responding.”

Talking about the role of technology application in the fight against the epidemic, Mr. Vu The Binh, Vice President and General Secretary of the Vietnam Internet Association said: “Response to an emergency and unexpected epidemic can be possible. There are times when telecommunications, Internet and IT have not been applied really well, but over time and lessons from reality, surely the role of telecommunications, Internet and IT will be clear in the process of pandemic prevention and control. as well as living with the virus in the near future.”

The fact also shows that, in the context of tightening distance and restricting travel, Ho Chi Minh City as well as many localities are taking advantage of online channels to reach people. The use of livestream on social networking platforms is considered the next step in the transformation, changing the way the government operates and interacts with the people; take advantage of technology and advantages spread on the Internet to listen, answer and persuade people to join hands in fighting the epidemic.

When the government is “activated”

For the first time, senior leaders of Ho Chi Minh City have directly interacted on social networking platforms with a large number of people, without going through written reports or a local government level. The information is feedback two-way instead of just one-way, indirect as before.

Using a new approach, with a wider spread on the Internet, allows the City government to have the tools to listen to more information. The comments have been received, the city government has more data to adjust the strategy and solutions to fight the epidemic in line with reality.

Assessing the effectiveness, Mr. Le Quang Tu Do said, when summarizing the opinions sent to the program, more than 80% are interested in food relief and money to maintain life during this quarantine period. .

Upon seeing the most pressing and essential needs, the city’s leaders immediately adjusted and removed the obstacles in disbursing relief money and distributing security bags to people in need. “The government has made rapid changes. Because in the past we were spreading out, but now the most urgent issues are focused on solving quickly,” said Mr. Do. 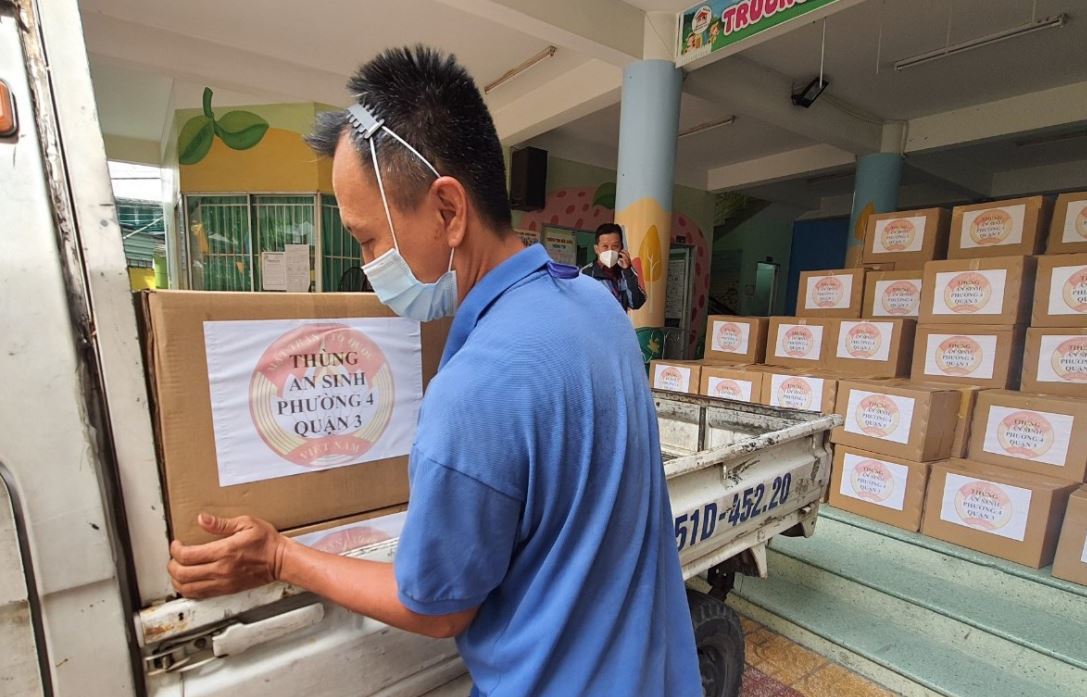 Packages of welfare and support are urgently being delivered to people in need. Illustration: Thanhnien

Talking to ICTnews, Ms. Do Thuy Duong, Director of TalentPool, Member of the Hanoi People’s Council 2016-2021 said that in the past, Ho Chi Minh City has actively interacted with people through many channels, now adding a new channel to listen directly. Along with changing dialogue, the City also has many other changes, so it is a change in the nature of anti-epidemic methods and anti-epidemic strategies.

Not only Ho Chi Minh City, a number of other localities are also starting to make changes in their operating methods, taking advantage of the development of technology in creating quick and effective channels of interaction with people.

Ms. Do Thuy Duong said that the effective use of new information access channels by local governments depends on the leader, because it not only needs to be open and connected in a timely manner, but also needs a new way of accessing information. operations, so that the collected information flows into policy and action decision data.

Quyen Linh: Livestream ‘People ask the city to answer’ helps people get closer to the government

“For more than 2 months now, I’ve been volunteering, I know very well how difficult people are, so sometimes I’m so frustrated that I can’t control it when I conduct a live livestream,” MC Quyen Linh expressed.

CEO of “Google of Russia” resigns

According to a Reuters source, e-commerce platform Shopee has canceled dozens of job offers in the past two weeks, right after the parent company Sea reported a heavy loss. Reuters interviewed four people who participated in a 60-member chat group on WeChat. The group was set up to discuss Shopee’s withdrawal of job offers just […]

Opensea is the world’s most popular NFT exchange. However, this may change with the arrival of new platforms such as NFTY Finance in the second half of this year. According to a recent report by Grand View Research, the global NFT (Non-fungible Token) market size is currently valued at $15.54 billion in 2021 and has […]

The number of unionized employees has fallen sharply

Posted 2 Feb. 2023 at 06:36 PMUpdated Feb 2. 2023 at 06:51 PM With the social movement against the pension reform, the unions are very prominent. This boosts their membership, if we are to believe the leader of the CFDT, Laurent Berger, who has just announced a 30% increase in their number in January. Could […]