It is easy to create fake messages, then thanks to the spread of social networks, these messages become dangerous tools to attack individuals and businesses.

“In the past, a person who wanted to create fake messages to spread chats on social networks like Facebook often had to create 2 accounts on 2 devices, or use 2 phone numbers to text messages. Now, everything is very simple. Users only need to use their phone to go to the application stores to download a lot of applications that allow them to create their own messaging accounts, if they do not know how to use the application, they can go to the permission pages. create messaging accounts for each other right on your phone browser,” said Mr. Nguyen Duc Khoi, a person specializing in providing services on the social network Facebook in Ho Chi Minh City.

The writer also went to the app stores to search for the keyword “Fake Messenger” on both the Google Play app store and the App Store, immediately a series of applications appeared and could be downloaded for easy use. These applications allow users to create chat messages with each other with many interfaces such as phone messages, Facebook messages or even Snapchat messages …

In addition, there are many articles on the Internet that guide users in detail and meticulousness, making it possible for them to create fake messages easily.

With the above message creation tool, besides many users, you can create chats with fun content, then post them on Fanpages or groups on Facebook for interactive sentences such as likes, comments and shares. … also appeared many messages created from the above tools to try to attack individuals and businesses appeared on Facebook. By taking advantage of social networks capable of creating “trends” (trends) and spreading at a rapid rate, many bad guys have created fake message content to chat between individuals, or individuals with business administrators, aiming to adversely affect individuals and businesses in the past time. 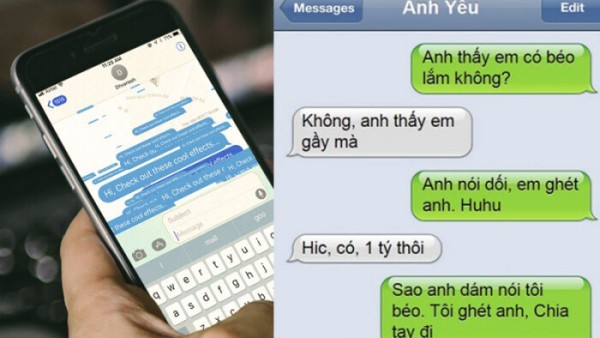 In particular, these fake messages often target online celebrities, businesses facing a media crisis or even teachers who are teaching at high schools or universities… The content of these back-and-forth chat messages is often related to “sensitive” issues such as money, soliciting to exchange points…

Nguyen Duy Vi, director of Buzi communications company, said that the harm of fake messages posted on Facebook is very clear and increasingly becomes a dangerous tool in attacking individuals or businesses. with bad intentions. For individuals, fake messages upset personal life, even destroy family relationships. Attacked people often suffer from mental attacks as well as great pressure from the online community because of things they have never done or never known.

For businesses, the damage does not stop at the mental but also the physical when potential customers will be hesitant to cooperate, or more specifically, the value of the company will be lost a lot. No matter how much efforts the business then makes, it will be difficult and takes a long time to restore its original reputation and position.

Contributing to this can be mentioned the significant contribution of a majority of social network users who have the tendency and preferences to blindly attack individuals and businesses without carefully checking information. . So when fake messages appear, this group of users will immediately “stone” and share without thinking. This is a very worrying situation about behavioral culture on social networks.

Mr. Huynh Le Khanh, CEO of Golden Communication Group, once witnessed a virtual account creating a false article about a young man being interested in a campaign. Then, that account shared his article in groups with a large number of members, and tended to be against the topic that the young man spoke about. And members of this group began to negatively discuss and share on their site intentionally misinterpreted information. And so that information is transmitted. When I checked the original source, the virtual account deleted my post. And this is not a new tactic to hit an individual or business.

“It is clear that we see that it has a great influence not only on the honor and reputation of an individual or an organization. The lack of information, that wrong information has even more serious effects, in terms of causing contradictions, division and inciting hostile acts of individuals, organizations, genders, factions … “, Mr. Khanh emphasize.

To deal with the problem of fabricating messages, according to Mr. Nguyen Duy Vi, in addition to businesses and individuals need to use social networks more carefully, such as avoiding revealing too much about their private life, avoiding giving information about their personal lives, and using social networks more carefully. negative news about yourself or your business. On the business side, it is necessary to have tools to review information on social networks and closely coordinate with media agencies as well as management agencies to be able to handle fake messages effectively. efficient and timely.

Mr. Huynh Le Khanh, also shared, in the world, there have been many studies and suggestions on how to limit these problems. Some solutions are proposed to improve the value of information, improve the complexity of information sharing, and create an information inspection system. Fact-checking centers set up will also help social network users have a basis for information comparison. In addition, it is recommended that each individual and organization establish a strong digital footprint, regular and timely information for its stakeholders. I am also something to do. And finally, the role of major news agencies and newspapers in each country needs to have the opportunity to react quickly to fake news, helping readers get a good source of information, which will help redirect public opinion. , according to the nature and valuable role of the mainstream press.

In this regard, Mr. Nguyen Duc Khoi said that the first thing people need to understand is that a message or chat on a social network is not proof, users should not believe it. It will be true if we have two people’s phones to be exact. Therefore, with this kind of information, only the authorities, or the network security force can check.

“Sometimes people say that they have been hacked by hackers or lost their phones, it is impossible to verify these cases,” Mr. Khoi said.

In the first week of October, there were 140 reports of online fraud cases submitted by users to the National Cyber ​​Security Monitoring Center (NCSC).

On November 10, Taiwan Excellence will hold a webinar “Towards Water Industry 4.0” within the framework of Vietwater 2021 exhibition, with the participation of 5 award-winning Taiwanese brands for breakthrough solutions in the industry. water sector. Towards the United Nations Sustainable Development Goal “Water and Sanitation for All by 2030”, Viet Nam has tightened measures […]

Compete with Chinese goods on e-commerce

Ms. Uyen (Ho Chi Minh City) recently turned to buying dresses and lipsticks from Chinese sellers on Shopee. According to her, fashion products from China are cheap, with diverse models, and the shipping cost is cheap. “The dress in China sells for around 100 thousand, while Vietnamese products range from 200 to 300 thousand. The […]

Building an educational ecosystem 4.0 in accordance with Vietnam’s practice

The event of Education Forum and School Exhibition 4.0 (EDU4.0) taking place on November 21 in Hanoi will introduce models, experiences and solutions to build a true 4.0 educational ecosystem. see off Vietnam. EDU4.0 is expected to give the community and attendees a comprehensive view of the Vietnamese education industry in the trend of the […]

Posted 2 Feb. 2023 at 06:55 PMUpdated Feb 2. 2023 at 20:58 Philippe Martinez had to come to terms with it. At the written request of a majority of CGT federations, the National Confederal Committee (CCN) of the central, made up of federal and departmental numbers, discussed on Wednesday the management team which will be […]